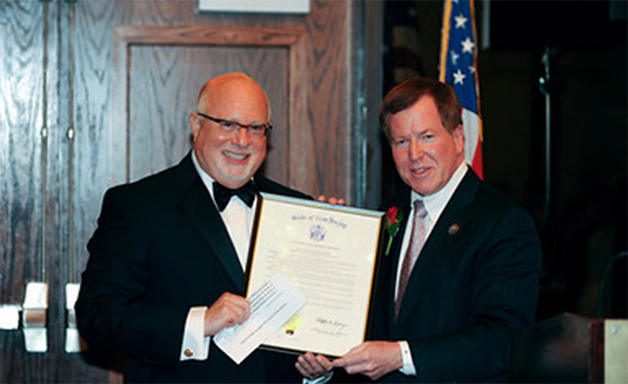 Jaime M. Weiss is the Greater Fort Lee Chamber of Commerce Person of the Year

On Saturday, November 13th, 200 people attended the Greater Fort Lee Chamber of Commerce’s Annual Dinner Dance, where Jaime Weiss, founder and president of Moonachie based Weiss Realty was honored as the 2010 “Person of the Year.”

“Since 1970, the Greater Fort Lee Chamber of Commerce has annually singled out individuals for recognition who have made a significant contribution to the Chamber and the Fort Lee Community,” commented Fort Lee Chamber of Commerce president, Gloria Oh. “Jaime Weiss, this year’s 41st annual honoree, is an accomplished business and community leader who has gone above and beyond in service to Fort Lee and the surrounding areas.”

The event was held at the Double Tree Hotel in Fort Lee where local dignitaries and chamber members gathered to acknowledge and honor Weiss’s many years of service to his profession and the community.

“This is a great honor,” says Weiss. “I’ve had a long history with Fort Lee having lived here since 1972 and had great success doing business in this wonderful community.”

Recent Fort Lee deals include the sale of a 2500 square foot medical co-op at 6 Horizon Road on behalf of 1206 Apartment Corp. and developing the Starbucks Coffee drive-thru and Bank of America kiosk on Route 4 East near the George Washington Bridge – a project he received the “Beatification Award” for having redeveloped a closed gas station.

Prior to this honor, Weiss has received industry recognition in 2005 from the New Jersey Chapter of the National Association of Industrial and Office properties and was a Deal of the Year Finalist for arranging a series of three complex office-leasing transactions for North Fork Bank. In 2009, Weiss was named a Commercial Broker All-Star by Real Estate New Jersey, published by Real Estate Forum Magazine.

As a real estate professional for over forty-three years, Jaime Weiss is recognized for his expertise in commercial real estate services. He has arranged land sales, solid investment properties, sold and leased office, industrial and retail space and has been the broker for some of the most sophisticated and significant transactions in New Jersey. As the president of Weiss Realty, he provides comprehensive office, industrial and retail leasing and sales, property management and investment services. His distinguished career began in 1976 with Cross & Brown Company. He later served in senior brokerage positions at Edward S. Gordon Company (now CB Richard Ellis) and Cushman & Wakefield and was founder and president of Newmark of New Jersey.

Under his leadership, Weiss Realty has assembled a national portfolio of more than 2 million square feet of office, industrial and retail property. During his career he has completed transactions totaling more than 20 million square feet and has represented many prominent corporation including Sony, Starbucks Coffee, North Fork Bank (now Capital One), Firestone, Caterpillar, Hartz Mountain Industries, and The Mack Company to name a few.

Weiss lives in Fort Lee with his wife Susan at the Horizon House. Together, they have three children: Matthew and Jordan - both rising stars in the real estate industry, and Hayley, a communications executive in Manhattan.